Just days ahead of the May 15th Democratic primary in Pennsylvania’s 7th District, NARAL Pro-Choice America and EMILY’s List joined Susan Wild for a “Women for Susan” planning discussion in Allentown, PA. Schriock and Hogue discussed Wild’s history of standing up for women’s rights, and how her progressive, pro-choice record stands in stark contrast to that of anti-choice Democratic candidate, John Morganelli. During the event, supporters and volunteers discussed what’s at stake for women and reproductive freedom in the race.

“At a moment where we have an administration that is showing every single day that they will exert power to keep women down, Susan Wild is the antidote,” said NARAL Pro-Choice America President Ilyse Hogue. “Candidates like Susan know that this is not a single issue, it is a question of our ability to fulfill our destiny, it’s about our economic security, it’s about education—it’s about us being able to provide for the families that we have. This first and fundamentally is about families thriving, in PA-07, in Lehigh Valley, and across the country.”

“Up against a Republican Party relentless in pushing an agenda that hurts women and families, the stakes this cycle are sky-high,” said EMILY’s List President Stephanie Schriock. “But the way Democrats will take back the House in November isn’t by electing anti-choice Trump supporters like John Morganelli. Progressive pro-choice Democratic women like Susan Wild will win back the majority in November—because unlike Morganelli, she will fight for Lehigh Valley values. Voters in the 7th want a candidate who will stand up for women’s rights and against the GOP agenda—and that’s exactly what Susan is going to do. We’re proud to stand with Susan and join her in this fight.”

NARAL Pro-Choice America and EMILY’s List’s are campaigning on the ground to educate voters about John Morganelli’s dangerous ideology when it comes to a woman’s right to choose. Earlier this week, NARAL and EMILY’s List launched an ad slamming Morganelli for his record of anti-choice views. The ad calls Morganelli out for his extreme views on reproductive freedom, immigration, and his praise for Donald Trump. You can view the full ad here. 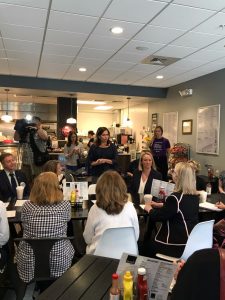 EMILY’s List, the nation’s largest resource for women in politics, has raised over $500 million to support pro-choice Democratic women candidates – making them one of the most successful political organizations ever. Our grassroots community of over five million members helps Democratic women wage competitive campaigns – and win. We recruit and train candidates, support strong campaigns, research the issues that impact women and families, and turn out women voters. Since our founding in 1985, we have helped elect 116 women to the House, 23 to the Senate, 12 governors, and over 800 to state and local office. Forty percent of the candidates EMILY’s List has helped elect to Congress have been women of color. Since the 2016 election, thousands of women and counting have reached out to us about running for office. To harness this energy, EMILY’s List has launched Run to Win, an unprecedented effort to get more women to run at the local, state, and national levels.