What is happening in Texas?

On September 1, Texas’ SB 8—the most draconian ban on abortion in the country—went into effect. SB 8 is a vigilante-enforced ban on abortion care at about six weeks of pregnancy, before many people know they are pregnant.

This cruel ban is still in effect. There are several lawsuits aimed at blocking SB 8 that are happening simultaneously. Whole Woman’s Health v. Jackson is a lawsuit filed this summer by the Center for Reproductive Rights, Planned Parenthood, and others on behalf of a broad coalition of abortion providers and other individuals and organizations in Texas. United States v. Texas is a lawsuit filed in early September by the U.S. Department of Justice against the state of Texas in an effort to block SB 8.

In Whole Woman’s Health v. Jackson, the U.S. Supreme Court was given the opportunity to step in and block this flagrantly unconstitutional law before it went into effect on September 1, and the Court’s anti-choice supermajority refused to do so. After failing to block the law before it went into effect, the Court rejected the providers’ request to stop the law’s enforcement. These appalling failures to block Texas’ law effectively rendered Roe v. Wade meaningless in the state. On September 23, the coalition of providers and other organizations again asked the Supreme Court to intervene and that request is still pending before the Court.

Right now, the requests to block SB 8 in Whole Woman’s Health v. Jackson and United States v. Texas are both pending before the Supreme Court. The Court has directed Texas officials to respond to these requests by noon on Thursday, October 21.

What makes Texas’ abortion ban different than others?

Texas’ SB 8 is enforced via an unprecedented bounty-hunting scheme devised to evade judicial scrutiny. This law allows anyone—a neighbor, coworker, anti-choice activist, or even a complete stranger from a different state—to sue someone for providing care or helping a pregnant person access care after about six weeks in pregnancy and be rewarded $10,000 or more.

Until now, every state’s attempt to ban abortion at six weeks has been struck down by federal courts as unconstitutional. Because of its vigilante-enforcement provision, which gives unprecedented enforcement power to private citizens instead of state officials, SB 8 is the only ban on abortion care at this stage that has been allowed to go into effect.

Which other states are planning to copy Texas’ vigilante-enforced ban on abortion?

Right now, anti-choice lawmakers—including governors, state house speakers, and state legislators—in 12 states have publicly said they intend to use Texas’ vigilante-enforced ban on abortion as a blueprint to attack reproductive freedom through copycat legislation. Florida has gone as far as to introduce a copycat bill (HB 167), with other states ready to do the same when state legislative sessions begin. 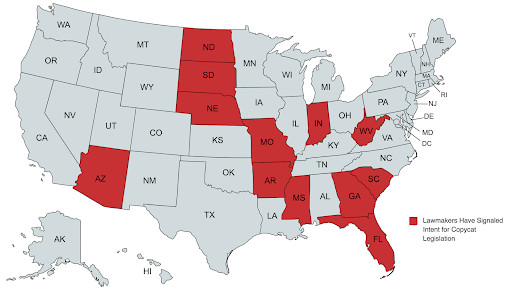 What is the impact?

While in effect, this cruel law effectively shuts off access to abortion care in the state of Texas. In the time since Texas enacted SB 8, the list of states signaling intent to pursue similar copycat legislation continues to grow.

The impact of SB 8 will continue to reverberate throughout surrounding states, disproportionately harming Black, Latinx, Indigenous, and other people of color; LGBTQ+ people; immigrants; and people with low incomes, all of whom already face the greatest barriers to accessing care.

Texas’ ban joins over 106 other restrictions on abortion access that have been enacted at the state level in 2021, making it the worst year for abortion rights since Roe v. Wade was decided. In the midst of these attacks, the anti-choice, anti-freedom supermajority on the Supreme Court solidified by the confirmations of Trump’s justices agreed to take up Dobbs v. Jackson Women’s Health Organization, a case involving Mississippi’s 15-week abortion ban that directly challenges Roe v. Wade. This case will be argued on December 1, with a decision expected before next summer.

What can our elected leaders do to stop these attacks?

It is clear that the threats to the future of abortion access are more acute than ever. Texas’ SB 8 and the flood of anti-choice lawmakers pursuing copycat legislation, coupled with the unyielding attacks on reproductive freedom across the country and the direct threat to the future of Roe, underscore the urgent need for the U.S. Senate to pass the Women’s Health Protection Act (WHPA). This critical legislation would protect the right to abortion care throughout the United States.

There is absolutely no time to waste: With every passing day, and even with Roe still standing, more and more people are being denied their constitutional right to abortion. We need a legislative solution to block attacks on abortion access like SB 8. WHPA is the best way to halt the evisceration of abortion access that is well underway across the country.