Reproductive Freedom Is a Major Winner in KY, VA Elections

Last night, all eyes were on Virginia and Kentucky as bellwethers of what’s to come in 2020. In Virginia, Democrats flipped both the state Senate and the House of Delegates, with Democrats who champion reproductive freedom withstanding attacks from anti-choice groups seeking to spread disinformation in the final days of the campaign in order to distract from the Republican party’s hugely unpopular agenda to ban abortion.

And in Kentucky, pro-choice Democrat Andy Beshear, a NARAL-endorsed candidate, defeated extreme anti-choice incumbent Matt Bevin to win the governor’s race in one of the reddest states in the country.

Americans across the country — in red, blue, and purple states — support reproductive freedom and candidates would be wise to make clear their commitment to ensuring every woman can make her own decisions about how, if, and when to raise a family. Seventy-seven percent of Americans support Roe v. Wade, and while Republicans are pushing an extreme agenda to ban abortion completely, fewer than a quarter of even their own supporters agree with that stance.

In 2017, voters in Virginia sent the most diverse and progressive freshman class ever to Richmond and nearly flipped the House of Delegates, a harbinger of what was to come in 2018 when Democrats took back the U.S. House of Representatives, creating the first-ever pro-choice majority in the House. This time in Virginia, voters sent a clear message rejecting anti-choice extremism and sending champions for reproductive freedom to Richmond.

The Republican party, anti-choice candidates, and right-wing groups used disinformation around abortion later in pregnancy and post-birth palliative care in a desperate attempt to pull out close elections. Prominent anti-choice group Susan B. Anthony List spent over $100,000 in an independent expenditure in Virginia targeting key Democratic incumbents and challengers and over $700,000 in Kentucky. It is clear that the anti-choice movement is using the odd-year elections in Virginia and Kentucky to test run the strategy of deploying disinformation in advance of 2020.

GOP Extremism is an Electoral Liability

Meanwhile, Republicans with a track record of backing anti-choice policies that would harm women and families tried repeatedly to appear more centrist and deflect attention from their conservative record. Some even minimized references to their party affiliation, a clear sign of the political liability of allegiance to a party hell-bent on banning abortion outright.

In Virginia, 72% of Virginians think politicians shouldn’t prevent a woman from making decisions about pregnancy or abortion for herself. And a clear majority of Virginians say abortion later in pregnancy should be legal if the woman’s health is at risk. NARAL invested hundreds of thousands of dollars in a two-phased research project (the second phase in partnership with Planned Parenthood Action Fund, Emily’s List, and Center for American Progress Action) to understand how voters respond to disinformation attacks about abortion later in pregnancy and how to respond effectively, including a six-figure total investment in ads and voter contact in Virginia. As part of this effort, NARAL responded to anti-choice attack ads on abortion later in pregnancy head-on by providing the facts about these highly complicated and personal situations.

NARAL VA also ran a five-figure ad buy defending reproductive freedom champions and working to unseat anti-choice incumbents and endorsed in 56 races across the state. NARAL Pro-Choice America and NARAL Pro-Choice Virginia together engaged tens of thousands of voters, including knocking on 46,000 doors, especially in key districts in northern Virginia, Virginia Beach and the Richmond suburbs and making 10,000 phone calls. 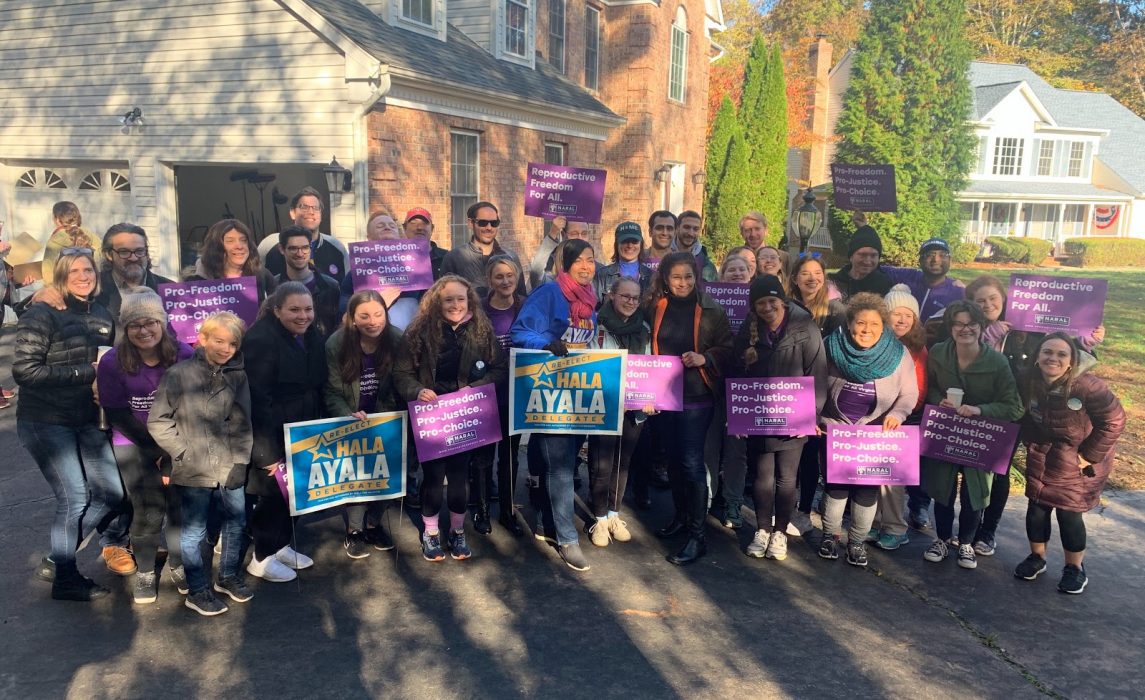 In Kentucky, where SBA List and its PAC outspent reproductive rights groups, including NARAL, by a massive margin, abortion played a role. In the fifth most conservative state in the nation, which Trump won by 30 points in 2016, Democrat Andy Beshear emerged victorious.

NARAL ran an independent expenditure including public polling and a five-figure ad buy to slam Bevin for his stance on reproductive freedom and support for criminalizing abortion. NARAL also turned out members to canvass, make calls, and volunteer for the Beshear campaign. Even in deep-red Kentucky, a recent poll found that a majority of Democrats (71%) and independents (62%), and 45% of Republicans believe that abortion should be legal and that the government should not prevent a woman from making the decision for herself. Similarly, a majority of Kentucky Democrats (62%) and independents (57%) and a plurality of Republicans (47%) are more likely to vote for a candidate who would allow abortion later in pregnancy when something goes wrong, such as a fetus that cannot survive, danger to a woman’s life or health, or other serious circumstances.

As we look to 2020, it’s clear that Trump and his anti-choice allies will continue to work to paint Democrats as “extreme” in order to deflect attention away from their extremely out-of-the-mainstream view that abortion should be banned and women punished for seeking abortion care.

But voters are looking for real facts. They have empathy and compassion for parents in difficult and complicated situations and know how much is at stake for reproductive freedom at the state and federal level. A recent Monmouth poll showed that 64 percent of voters said the issue of abortion will play an important role in who they vote for for president and voters continue to view a candidate’s support for abortion rights as key to earning their vote in 2020.